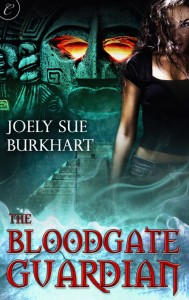 Worlds within worlds await through the Maya Bloodgate...

Dr. Jaid Merritt doesn’t do digs. The last time she ventured into the jungle, someone died. Now she’s content to decipher Maya glyphs from pictures sent to her by her famous archaeologist father. But when he goes missing while trying to perform a ritual based on her translations of an ancient codex, Jaid must put aside her fears and travel to Guatemala to find him.

After misusing the Bloodgates to bring his twin brother back from the afterlife, the Maya priest known as Ruin was cursed by the gods to stand as the guardian for all time. He was unable to stop Dr. Charles Merritt from opening the gates, and now demons roam this world. The last thing he wants to do is hurt the beautiful woman who is somehow infused with his magic, but if she uses the codex to retrieve her father, Ruin must do his duty. And this time, he won’t fail. Even if it kills him. Again.

I'm bias, I freely admit that. Joely Sue Burkhart is a friend, but she didn't give this to me as a review copy -- bought it with Mark's hard earned money, LOL -- and I didn't beta read The Bloodgate Guardian

Once again, Burkhart blew me away with her attention to detail, research, and amazing characters. She built a fully realized world seeped with Mayan mythos. She doesn't burden the story with her research but weaves it within the plot seamlessly. A great twist on the "end date" stories out there.


He never hated his magic until it compelled him to kill.

I was pulled in from the first sentence, Burkhart kept the action moving, the tension high, and I didn't want it to end despite the very satisfying ending. Bloodgate is a strong stand-alone story yet open to a possible series. I loved the world and the people thus would be thrilled to see more.

The characters...what can I say?...they spoke to my heart, something that happens every time I pick up one of Joely's stories.

Ruin's delicious. A strong alpha man doomed to live forever alone consumed by guilt. Burkhart took a historical/mythological person and breathed life into him. No apologies made for his culture yet a person I could sympathize with.

Jaid's stronger than she thinks she is and I totally related to her. Jaid acts and feels how I imagine I would being thrown into that story.

Definitely run don't walk to get this one.
Posted by Sherri at 5:32 AM

Great job on the review, Sherri. This book is on my TBR list.

I know she had plans for a series then axed the idea but from some recent conversations we've had it looks like there may at least be a sequel :)

It's well worth the read!