Book Review -- Hurt Me So Good

Linky Update: Hurt Me So Good

I had the honor of working with Joely Sue Burkhart on this story as a beta reader -- and consider her one of my blogland friends -- so this review may be a wee bit bias. I love playing "what if" games and it was pure joy to do so with Joely, creating a sweet sub-plot. This is the second book in the Connagher series and releases next week on October 5th in e-book. 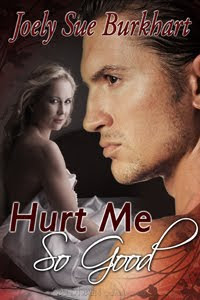 One sub to please the Master…in any way he wishes.

Once, and only once, he lost control of his inner Dom—and it cost him his fiancée. Now, no one knows how hard he works to keep his darker appetite for pain buried. No matter how much his saucy, confident associate producer makes his fingers itch to once again take up his riding crop.

Shiloh Holmes is a sub, but she’s no doormat. She’s always suspected Victor has the skills to feed her insatiable need for pain, and now she’s found the perfect way to crack his formidable control. Develop a new reality show, America’s Next Top sub…and dare him to compete.

Week after week, as Shiloh fearlessly challenges the real Victor to come out of hiding, he realizes his past mistake was only a blow to his pride. If he loses Shiloh, he could lose his heart.

Joely Sue Burkhart is a master, and I do mean MASTER, at character development. I always feel like I might be able to meet one of her characters in real life. They have hopes and dreams, fears and worries, had highs and lows. They are human. I love a great character.

In a nice twist for a romance this really is Victor's story because he has the most to lose. I loved watching him struggle with who he is. On the surface Victor is powerful, seemingly on top of the world. But he has flaws both real and imagined. Shiloh knows what she wants, sets out to get it, and knocks poor Victor's world on its axis.

Peppered throughout the story are Shiloh's blog posts, a sweet tie-in to Conn's story Dear Sir, I'm Yours.

I can only hope Vicki's story (the third in the Connagher series) will have a similar tie-in. I understand Mal, a fascinating secondary character, is due for a happily-ever-after as well. For a Hurt Me So Good prequel teaser you can read Lie To You. You can't go wrong with a Burkhart read.
Posted by Sherri at 6:56 AM

Hugs, Sherri, you helped me so much by beta reading and giving me that wonderful idea for the subplot. THANK YOU from the bottom of my heart!

My pleasure Joely. Love working with you!

Agreed, on all counts. I can't wait until Victor's release date, when we can pimp the novel properly (aka with "BUY ME NOW!!!" links).

Hiya Sherri, great review! I think we're all in your debt for that fabulous subplot. :)

Who'd have thunk it?