Author Kait Nolan is in the house! 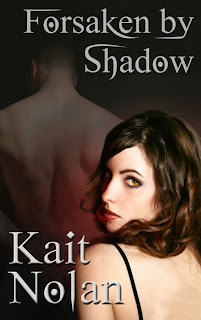 I'm so honored to have Kait Nolan here during her month long blog tour promoting her deput novella Forsaken by Shadow. I loved the story -- if you missed my review you can read it here -- and hope you will too. I've been following Kait on her blog, Shadow and Fang, since last summer. I'm glad to be able to support her, in some small fashion, here today.


You can get your copy at scribd, Smashwords, Amazon, or Barnes & Noble.

Let's start with something fun and close to both our hearts. What is your favorite food?

Are we talking about "if you could only eat one food for the rest of your life?"

Probably bread. I LOVE bread in all its forms, and I've gotten addicted to Artisan Bread in Five Minutes A Day. Pasta in any form is a close second.

I recently followed a link from Paperback Writer, which I know you also follow, and realized I haven't traveled nearly as much as I'd like. How well traveled are you?

Where have you been, what's your favorite, and why?

Let’s see…where? Canada, Mexico, England, Wales, Ireland, Italy, Scotland, France, Japan, Taiwan, and if you count the airport, Hong Kong. Scotland is, hands down, my favorite. I did a study abroad stint at the University of Edinburgh and absolutely fell in love with the country and the people.

Oh, studying abroad! That had been a dream of mine once upon a time. And in Scotland *le sigh* How do you feel this has helped you in your writing?

Wherever I went I always wanted to leave the tourist trail and immerse myself in whatever the local culture was. Forget McDonald's (I don’t even eat there when I’m in the States). Give me local cuisine. Well, except for when we got to Taipei after six days of nothing but sushi -- French fries have never looked so good! I think it’s given me a broader viewpoint and an appreciation for other cultures, which has been a major help when creating cultures for my own universe.

How important do you feel world-building is to a paranormal/fantasy type novel in general and is it more or less important than character-building? Why?

Well I’m a world-building junkie, so I think that world-building in a paranormal/fantasy is essential. Whether you’re setting your book in an alternate version of this world or on a whole other planet, it is your responsibility to orient your reader and paint the scene. World-building is central to that. That having been said, it doesn’t matter how good your world-building is if you don’t spend time creating believable characters. Both are equally important.

I’m curious about the rules you created for your world. Is it more of a discovery process or do you work out the boundaries before ever writing a word? You’ve said on your blog that you think in series and I know you have more planned for this world. Have you found a rule that works fabulously in one book but is a pain in another?

I totally make it up as I go. So far I haven’t boxed myself in with any rules that have caused me any problems.

Did you encounter any unexpected research detours while writing Forsaken by Shadow and what happened?

Well it wasn’t unexpected, but I did a lot of research on mixed martial arts fighting for the beginning to figure out what Cade/Gage’s career would be like. It’s not like it was a torment to watch lots of YouTube videos of hot young fighters.

Yeah, I'm sure that was painful *g* Speaking of pain, what was the most challenging aspect of writing this book?

The hardest part actually was that I was in the middle of developing a new class (college instructor is one of my jobs) at the time. It was really difficult to jump back and forth between fiction and education -- the two definitely DO NOT have the same voice. That kind of multitasking isn’t as easy as juggling multiple fiction projects.

Forsaken by Shadow is your debut novella -- What is your writing process? What elements do you tackle first and how long from inspiration to completed work?

In a perfect world I am multitasking -- writing one thing while plotting out the next project. That’s how it worked with FBS. I was finishing up another book when the idea occurred to me. I plotted the whole thing out in about four days (which is miraculously fast), then let it sit while I finished the other book. I started writing in late September and finished the first draft at the end of January. The rough draft was pretty clean, so revisions didn’t take too long. I’m not always that lucky. Some books go faster on the first draft and slower on revisions. The difference seems to be whether I start with characters first or plot first.

What made you use the points-of-view you did in Forsaken by Shadow? Did you choose or did your characters?

I chose. Hero and heroine are pretty standard POVs for me with anything I write. In longer works, I usually add in the villain’s POV. The whole shebang is in limited third person, one person’s perspective per scene (as opposed to head hopping).

What was the most surprising thing you learned during Forsaken by Shadow?

I guess that the whole thing was relatively painless. The book before (and the one I’m writing now) was like pulling teeth. I didn’t struggle a whole lot with FBS, and that was a new experience. I’m still trying to identify why so I can duplicate the process!

On your blog you’ve mentioned using both a critique partner and beta readers. How are they different and what did you take away from them during Forsaken by Shadow?

My crit partner is my intensive, there for every step of plotting, brainstorming, etc. She’s my ultimate editor and gets first brutal pass at my first drafts. Once I do revisions based on her critique, then it goes on to beta readers, who do a more general read through for stuff that doesn’t make sense or whatnot.

What is your favorite line or moment from Forsaken by Shadow?

Hmm. Well I really love the scene in Embry’s hotel room, before he’s gotten his memory back. I absolutely love that kiss. Makes me go all swoony every time I read it.

Yep, I like that scene too, very swoon-worthy. What writing advice are you glad you followed or ignored?

Start with the inciting incident. I tried this and found it didn’t work. Largely because it completely eliminates the setup during which you make your reader give a darn about your characters.

What writing advice would you give?

Self-publish something. Even if you want to go the traditional route. You will learn SO MUCH from the entire process and will wind up far more educated about the business end of things, which is an area many authors fail in. And you just might make a little bit of money and gain a following.

Who is a published author who helped you? And how?

Zoe Winters -- She is a self publishing guru and a good friend. She walked me through the process from A to Z so that I put out the best possible product.

I asked my best friend what she’d like to know and she asks: What is your best or favorite setting for writing? Time?

I’m not picky about where or even when. I just require quiet, which I tend not to get too often. I’m fortunate enough to live close to work, so my best writing time lately has been during my lunch break when nobody else is home.

What was your favorite childhood, I'm thinking middle school or younger, book?

It’s a tossup between And Both Were Young and A Ring of Endless Light both by Madeleine L’Engle.

Yeah, Madeleine L'Engle was, still is for that matter, one of my favorites. Who influenced you as you were growing up, and who made an impression on you as you embarked on your writing?

I’d have to say L.J. Smith (of Vampire Diaries fame) was one of my biggest influences. Back when I was a teen, there wasn’t the explosion of awesome in the genre that exists now. There was very little for older teens to read and most of what was available seemed to think that high schoolers had the brains of ten year olds and the hormones of college students. L. J. Smith didn’t. She wrote awesome books that left me wanting more. When I plowed through everything she’d written, I was tired of waiting for more, so I decided to write more of what I wanted to read. I actually submitted my first book for publication at fifteen. The world is grateful it was rejected.

I've read a bit by Smith and have recommended her to my niece. I think I learned about her too late to really appreciate her though. Because my reading list isn't long enough *snort* what are you currently reading?

Right now I’m in the middle of Urban Shaman by C. E. Murphy, Valiant by Holly Black, and An Echo in the Bone by Diana Gabaldon.

Love Gabaldon, still doing my re-read before reading Echo. What author or book do you recommend again and again? And why?

Cassandra Clare’s Mortal Instruments trilogy. It’s the first thing I’ve read in ages that absolutely blew me away in an “I aspire to be half that good someday” sort of way.

I've heard nothing but great things about the Mortal Instruments trilogy. Yep, going to have to push that to the head of the line. Who doesn’t love a tortured hero? Who are some of your favorites?

Jace Lightwood from The Mortal Instruments trilogy and Zadist from J. R. Ward’s Lover Awakened are the first to come to mind.

What do you do in your spare time? LOL, I know, what spare time!

Spare time. Snort. That’s funny. I work on my food blog, Pots and Plots, love on my dogs, and watch lots of movies.

So Mick makes the best hot wings around -- do you have a recipe to share?

Actually, I don’t even like hot wings. :) Wings in general seem like way too much work without enough payoff. I’m more a pizza/pasta/bread girl myself.

I think we were separated at birth, Kait, my thoughts exactly, LOL. In closing, what do you think readers would be shocked to discover about you?

Kait, thanks so much for being here today!
Posted by Sherri at 7:06 AM

Thanks for having me Sherri!

So glad to have you!

What a great interview, Sherri.

But Kait forgot one thing...

Where are the pictures of the dogs? LOL!

Oh I was supposed to post pics of the pooches? I'll see about making a post of those at my own blog :D

mmm... bread... Scotland... Outlander...
I like your advice to self-publish something. I think it's a great thing to have tried - maybe next short story I manage to write I'll finally take the plunge...

Thanks for stopping by Deniz!!