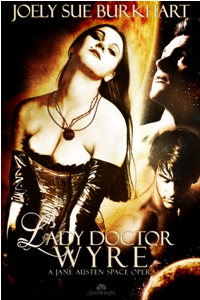 A dangerous technology could conquer the universe. Love could set it free.

Charlotte, Duchess of Wyre, once held the Queen’s highest confidence—and the technological secret that keeps the royal heart beating. Fearful of what atrocities that Britannia might commit with her research, Charlotte turned to the galaxy’s most infamous assassin, Lord Sigmund Regret, to stage her own death.

Even without the simplest of luxuries, seven years hiding in the Americus colony is preferable to one day in the Tower of Londinium. Until a bounty hunter’s bullet forces her to revive her research. Now the same nanobots that keep the Queen alive also run rampant in Lord Regret’s body. Making his yearly Solstice visits increasingly…intimate…and complicating her courtship with the safe and honorable Sheriff Gilead Masters.

When the Americus colony declares independence, and her humble sheriff makes a shocking confession, Charlotte has had enough. Weary of running, tired of living without tea and silks, she fires a warning shot across Britannia’s bow: cease hunting Lady Wyre, or lose the technological power the crown holds so dear.

Her next task isn’t so simple. Somehow she must keep the two men she loves alive—and prevent them from killing each other.

First of all, I had the pleasure of working with Joely on this as a beta reader, thus may be a wee bit bias.

Just love that cover, don't you?

Another amazing read! This story is a wonderful mix of steampunk, sci-fi, western frontier, regency London, and as Burkhart calls it "Jane Austen Space Opera." Burkhart peppered the world with enough information for you to see it, feel it, without burdening the story. A skill I admire. I love a richly built world but often find it slows the pace of the story...not so with Lady Doctor Wyre.

To describe the coverlet as colorful would be as great an understatement as stating that Queen Majel was simply a powerful leader.

That line speaks volumes about the world not just the owner of said coverlet. (And there is more to come in this world as a prequel is in the works as well as Majel's story.  :gleefully rubs hands together:)

Burkhart's trademark skill with the characters is in full force. (She utterly blows my mind with her characters.) She makes them live and breathe and I can see them walking off the page into the real world.

Charlotte's duality of girly-girl and scientist is awesome. She's a strong woman, no wilting violet, who has and will do what she must to survive, yet she remains true to her femininity -- love that.

If they want to lure me with a party, then let me prepare for a full celebration. Charlotte let a warm smile brighten her face and she clapped her hands with delight. "Oh, excellent! I haven’t enjoyed a decent soiree in ages. Do come in, gentlemen, while I pack for the trip."

She formed an unusual relationship with Lord Regret who just happens to be an assassin. I could completely see Sig and Gregar -- Joely has some great assassins in her backlist -- swapping knife throwing techniques over a pint. Who'd have thought assassins could be so appealing? A status quo hampered by her falling in love with the local Sheriff -- think Clive Owen here folks...'nuff said.

With a lazy smile to match his, she leaned back in her chair, all her tension and haughtiness traded for indolence. "Actually, he was very good, and I did not have to tie him up first to have my way with him."

So, so my favorite line in the story!

Then all hell breaks lose and not because Lady Wyre has found herself in love with two men!

Sig snorted. "Her, afraid? She lived in the mouth of the lion’s den, Sheriff. She can certainly handle one President and a couple of marshals. If I know her at all, she’s already managed to figure out why a shopping trip is in order."

I loved this story with its twists and turns and was engrossed from the first page.  It's so hard to write a review and not give away spoilers!  So I'll just say, buy it, read it, and maybe you'll see why Joely Sue Burkhart is an auto buy for me. Lady Doctor Wyre releases March 29, 2011 from Samhain Publishing.

Great review, Sherri. Based on your review, I'm going to check out the book further. You never know, it could end up on "Did I Choose Your Book?" someday. :)
BTW - I'm also a SAHM of three boys, so one less than you, but I also dream of a clean bathroom in Heaven. :)

Thanks Ciara. I find it really hard to write reviews especially ones I had an inside track on. I hope you do check it out or any of Joely's stories for that matter :)

Sherri, thank you for such an incredible review, but more, for providing such great feedback early on! The edits were a breeze this time, in great part to you.

It was my pleasure Joely! Love working with you...forever your guinea pig :)

I was nodding with every line. Great review Sherri!

Thanks SJ but I think yours is probably better :)